A new era in Mercedes-Benz dashboard design is officially underway with the unveiling of the MBUX Hyperscreen, set to debut in the upcoming fully-electric EQS.

The curved unit stretches from pillar to pillar and features software that’s capable of learning, ultimately adapting the display and its operating concept to the user, making personalized suggestions.
Furthermore, the user doesn’t have to scroll through various submenus or even use voice commands seen as how the most important applications are always on display in both a situational and contextual way at the top level in view.
Read Also: 2022 Mercedes EQS Flagship Electric Sedan Shows Us More Skin Than Ever Before
“With our MBUX Hyperscreen, a design vision becomes reality,” said Daimler design boss, Gorden Wagener. “We merge technology with design in a fascinating way that offers the customer unprecedented ease of use. We love simplicity, we have reached a new level of MBUX.” 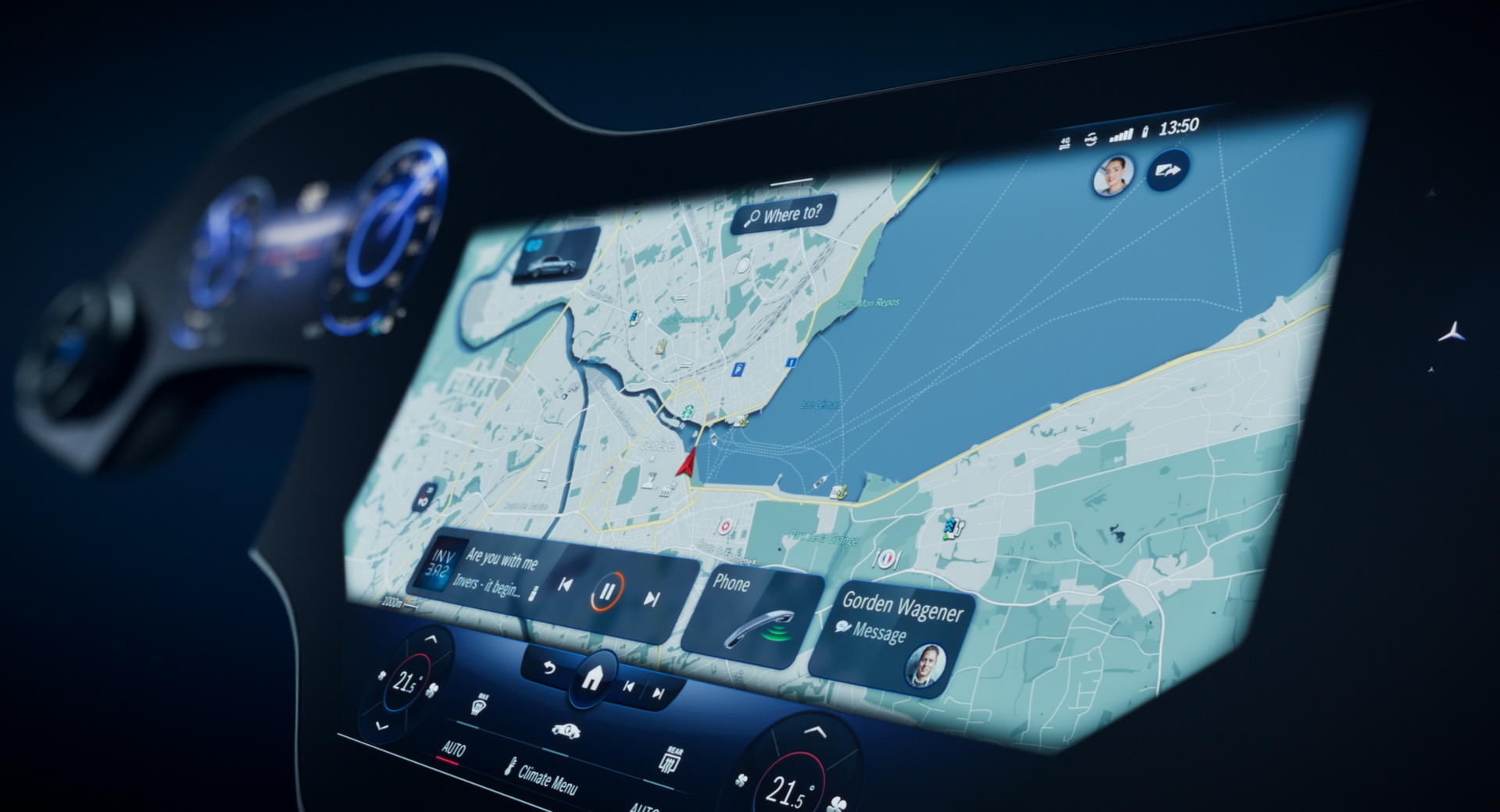 Visually, there are several displays integrated within the curved panel, which also features analogue air vents, thus connecting the digital and physical world. The screen band is surrounded by a continuous plastic front frame, with integrated ambient lighting installed in the lower part – this makes the Hyperscreen unit appear to float on the instrument panel.
The passenger also has his or her own display, customizable for up to seven different profiles. It’s important to note that the entertainment functions of the passenger display are only available during the journey (within country-specific legal regulations). For example, if the passenger seat is empty, the screen becomes simply a digital decorative part (animated stars are displayed). Meanwhile, all the graphics are styled in a new blue/orange color scheme brought to life via active OLED pixels.
Moving on to the suggestions part, the AI will make various suggestions which the user can easily accept or reject with just one click. 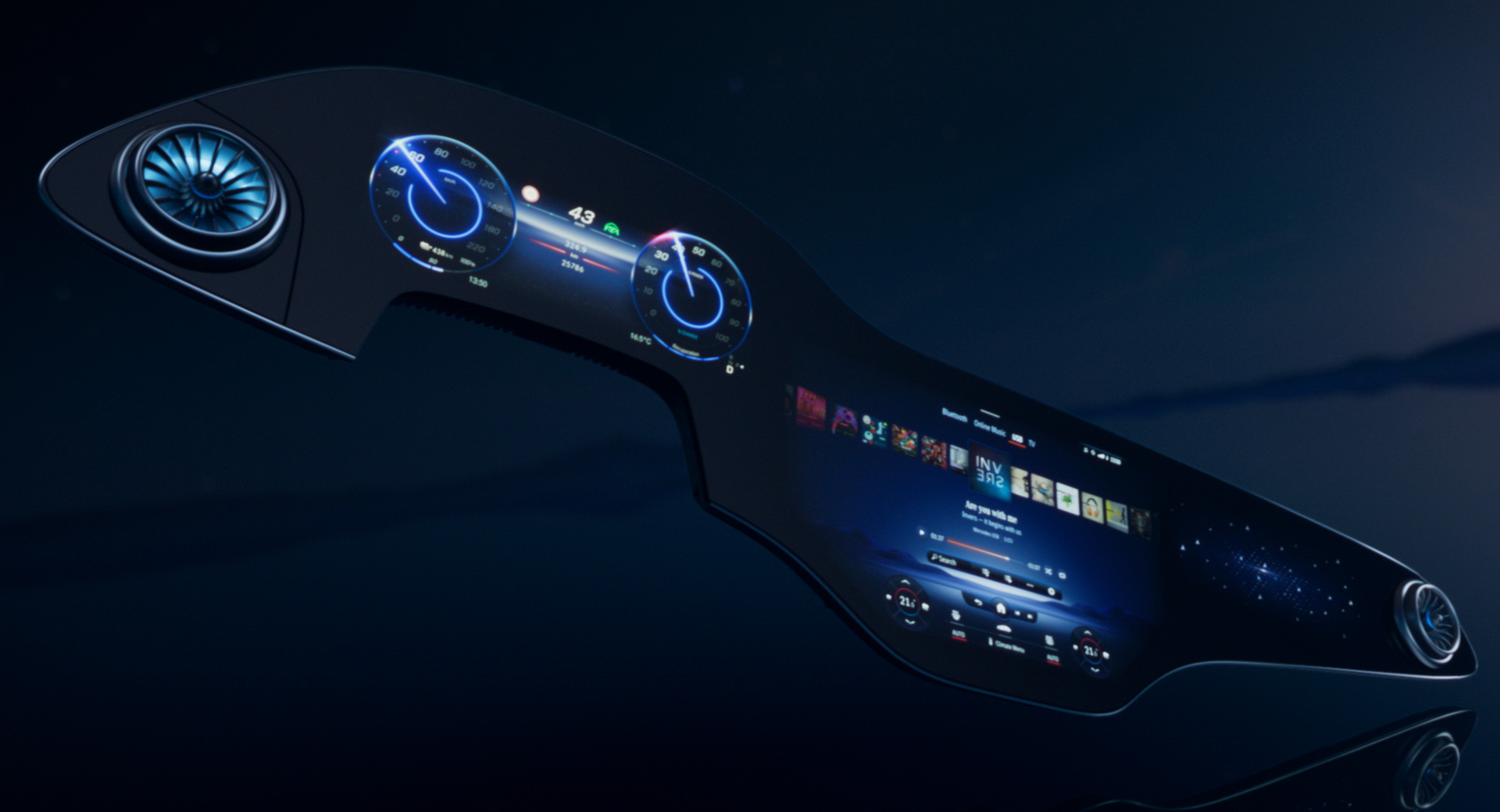 For example, if you’re always calling a certain friend or loved one on the way home on Tuesday evenings, the MBUX system will remember and ask you to make that call on that particular date and time. Since all MBUX suggestions are linked to the user’s profile, the suggestion will not be made if someone else is driving the car.
“The chassis of the EQS can be lifted to provide more ground clearance. A useful function for steep garage entrances. MBUX remembers the GPS position at which the user made use of the ‘Vehicle Lift-Up’ function. If the vehicle approaches the GPS position again, MBUX independently proposes to lift the EQS.”
As for the actual hardware, Mercedes say that there are a total of 12 actuators behind the touchscreen for haptic feedback. Also impressive is the processing power, with 8 CPU cores, 24 GB of RAM and 46.4 GB per second RAM memory bandwidth.
“The MBUX Hyperscreen is both the brain and nervous system of the car,” said Mercedes board member Sajjad Khan. “The MBUX Hyperscreen continually gets to know the customer better and delivers a tailored, personalised infotainment and operating offering before the occupant even has to click or scroll anywhere.”