It’s not very often that I would recommend the dual-clutch or automatic version of a performance car over a six-speed manual. However, in the case of the 2020 Renault Megane R.S. Trophy, I would absolutely recommend the EDC (Efficient Dual Clutch) over the stick shift.

Roughly seven months ago, when much of the world was locked down during the first wave of the coronavirus, I had the pleasure of driving the Megane R.S. Trophy with a manual for a week. Despite a few quirks, it was a pleasure to drive. The EDC variant is even better.
A powertrain sent from the heavens.
Like the manual, the EDC-equipped model features a 1.8-liter turbocharged four-cylinder producing 296 hp (221 kW) and 310 lb-ft (420 Nm) of torque. This is one of the finer engines powering any modern hot hatch but more on that later. Drive is sent exclusively to the front wheels. 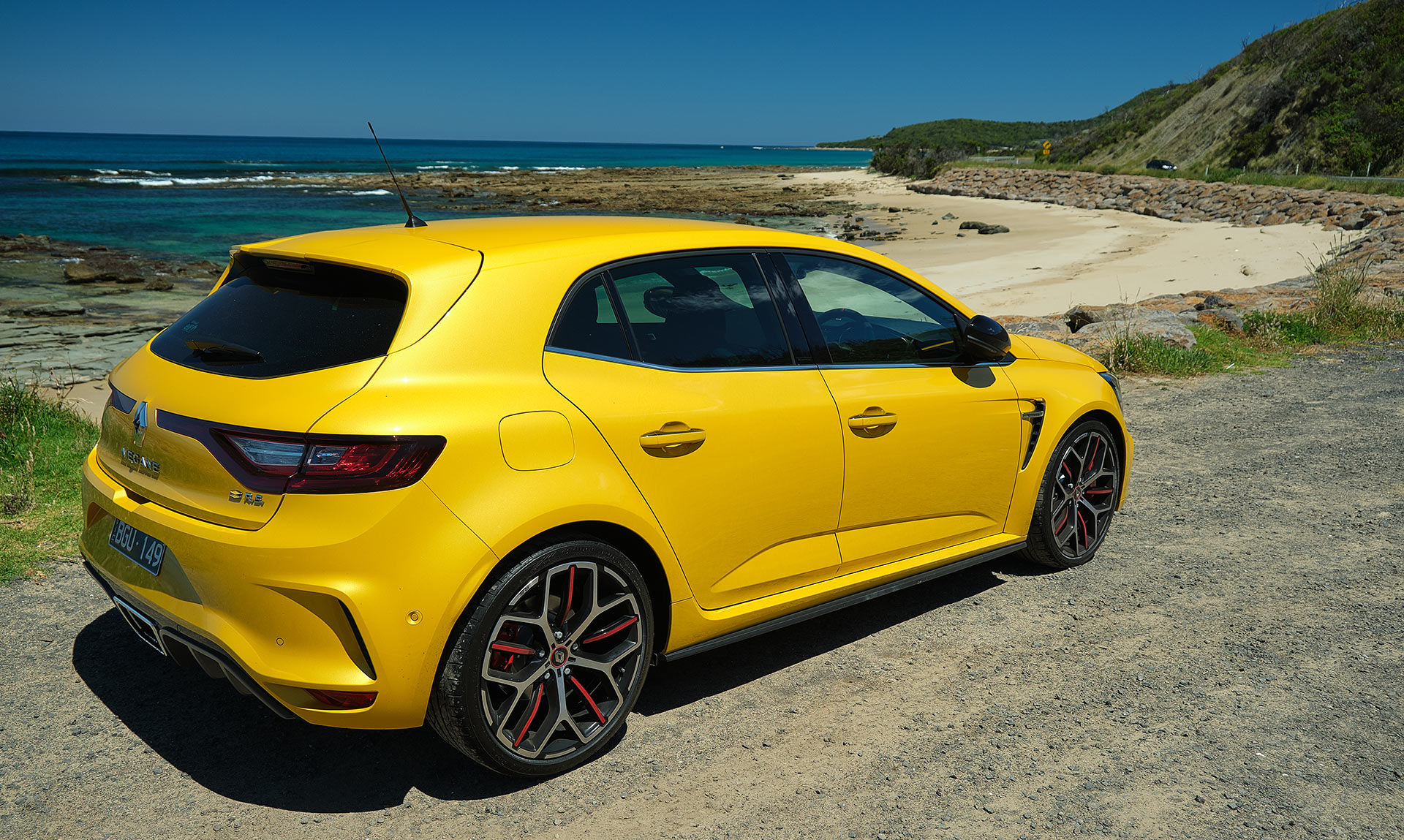 Going into my week with the EDC model, I was a little apprehensive, particularly since I had driven the VW Golf GTI TCR with its DSG just a couple of weeks beforehand (review coming soon) and was left wondering if Renault’s dual-clutch could compete. It doesn’t just compete with the VW’s – it is actually better.
A six-speed unit, the transmission is silky smooth at low speeds and free of any of the hesitation of others similar transmissions on the market. Sure, the paddle shifters are mounted oddly high on the steering column but all is forgiven the moment you start driving the Megane RS Trophy in anger.
The hot hatch also comes equipped from the factory with an exceptional exhaust system that produces a lovely burble at idle, even when you’re driving in the ‘Neutral’ mode. Change things into Race or Perso modes and the aural experience is enhanced threefold as the exhaust opens up. Pin the throttle and things only get better. 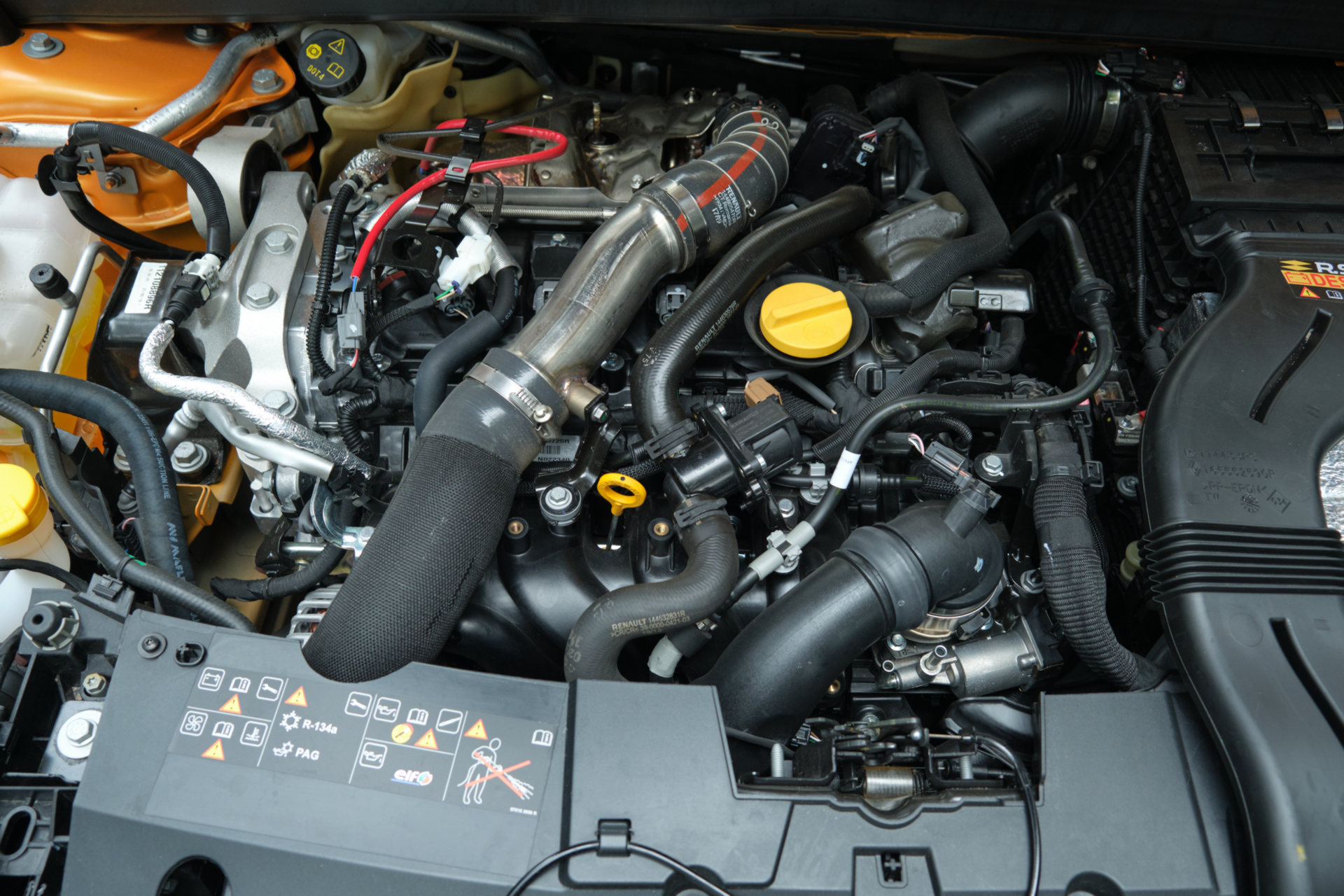 The drive
The six-speed manual offered for the car is good but not great, especially when compared to the exceptional stick shift of the Honda Civic Type R. The most immediate difference you’ll notice with the EDC is that on upshifts, it prompts a lovely crack from the exhaust. What’s even more thrilling is the fact that the gearbox even gives you a small kick in the chest when changing up through the gears. Sure, it’s not quite like the kick you get from a Lamborghini Aventador in Corsa mode, but that’s not a fair comparison and, anyway, it does add some lovely drama to the experience. Downshifts are also a pleasure where, once again, the exhaust fires to life, producing the type of whipcrack sound that not even a Hyundai i30 N can match.
Read Also: Driven – 2020 Renault Megane R.S. 300 Trophy Is Raw, Uncompromising, And Addictive
With the EDC, the Megane RS Trophy feels rapid in a straight line. Renault claims it will hit 100 km/h (62 mph) in 5.7 seconds, matching the Civic Type R. Our test car come fitted with the available R.S. Monitor that provides all kinds of telemetry data, so we decided to put it to the test. With launch control enabled and a healthy dose of wheelspin, I was able to match Renault’s official time.
With launch control switched off, I recorded a time of 5.12 seconds to 100 km/h (62 mph), a figure I found a little hard to believe. Is the onboard telemetry system a little optimistic? Possibly. It’s worth noting our 5.12-second run was recorded on a stretch of private road with a temperature of 36 degrees Celsius (96.8 degrees Farenheit) outside, resulting in a very sticky piece of pavement which eliminated most slip from the tires. 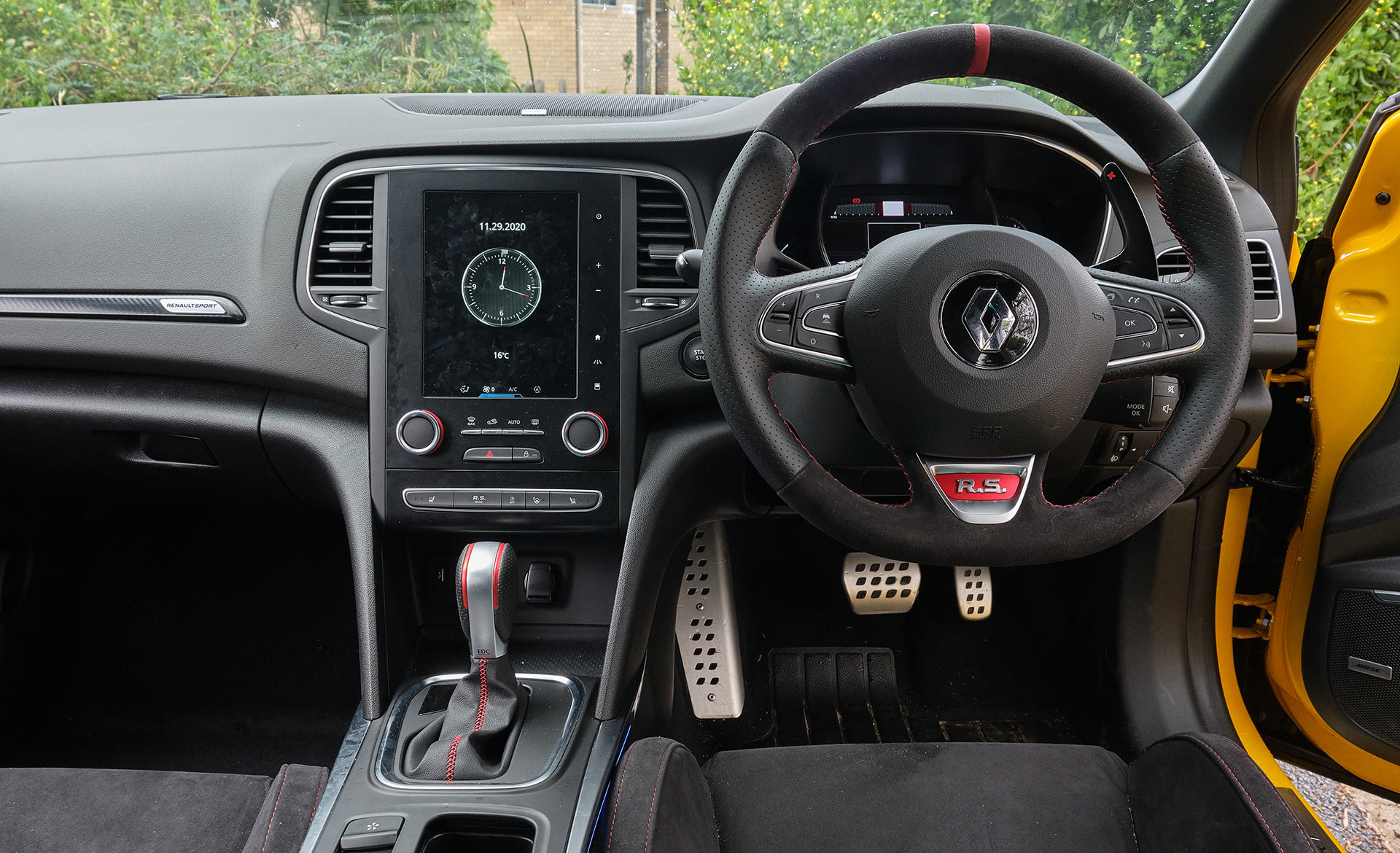 As with any good RenaultSport product, the R.S. Trophy also thrives in the corners. The limited-slip differential puts the power to the ground well and immediately inspires confidence in the driver. Grip from the Bridgestone S001 tires seems endless. However, if you’re a little too eager on the throttle through a corner, not even the LSD can prevent the car’s grunt from spinning up the front wheels and pushing you wide.
The ‘controversial’ stuff
One area of debate about the car relates to its four-wheel steering system, or as Renault calls it, ‘4Control.’ You can adjust how this system behaves in the Perso menu through the Dynamic Drive System. In its most active mode, ‘Neutral,’ the rear wheels turn up to 2.7 degrees at speeds of under 60 km/h (37 mph) while in ‘Race’ mode, they turn at speeds below 100 km/h (62 mph). Regardless of which setting you choose, the car darts into the corner with so little effort and with such small movements of the steering wheel that it initially feels unnerving. However, once you get used to using such minute steering inputs, it adds a unique character to the car. We can’t help but thinking, though, that some people will not like it. 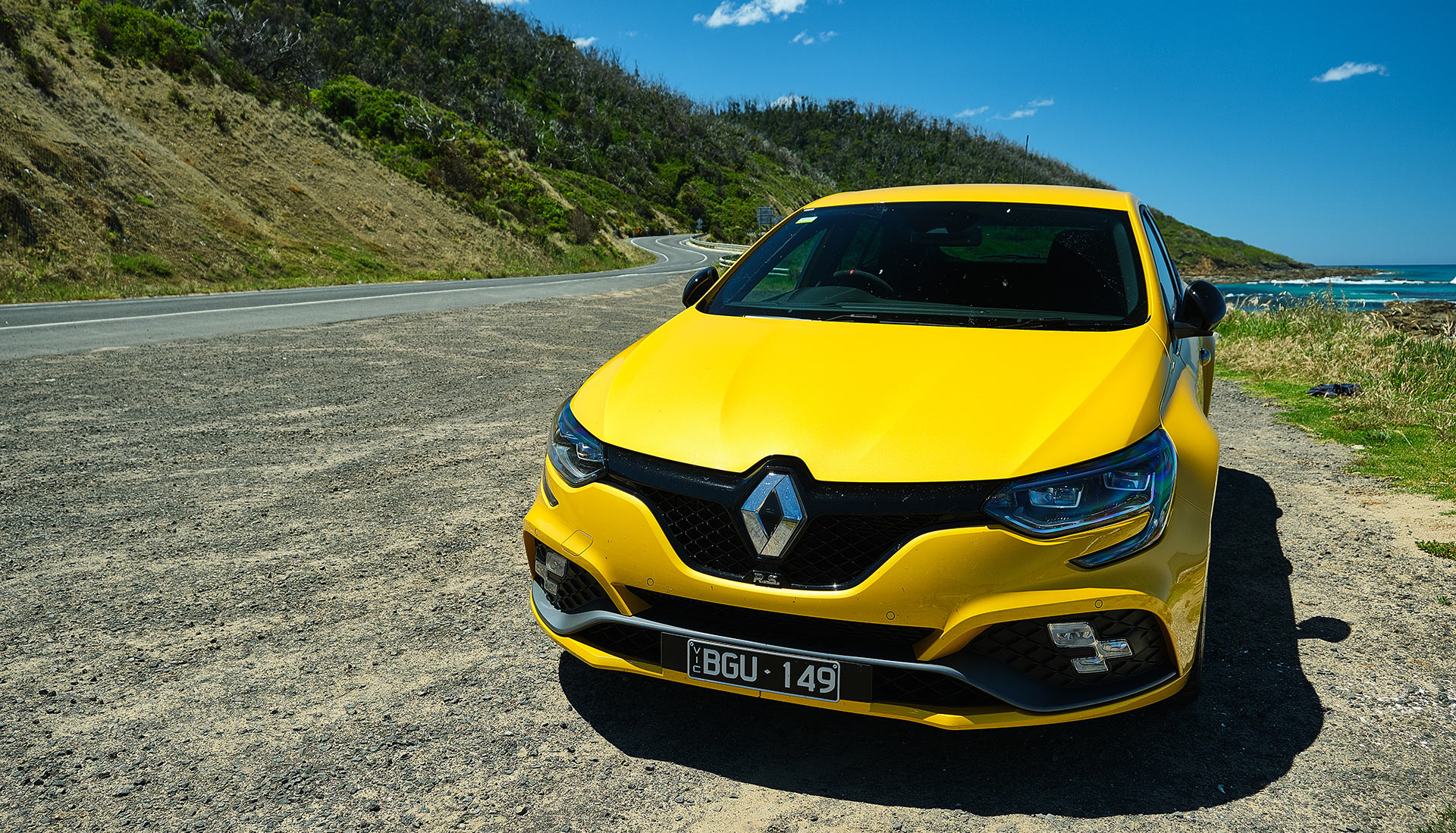 Another aspect of the car that has ruffled a few feathers is the suspension, namely due to the fact that it is not adjustable like so many other class-leading hot hatches. To try and rectify this, RenaultSport has fitted hydraulic bump stops, but even still, the car rides firm.
During my week with the car, I covered roughly 1,400 km (870 miles) with a mix of twisting coastal roads, long stretches of highways, and technical mountain passes. On bumpy roads, the suspension can grow tiresome but for the most part, I had no complaints. Admittedly, I own a Kawasaki Ninja ZX-6R so am probably more tolerant of harsh-riding vehicles than most. Objectively, though, the non-adjustable suspension system puts the Megane R.S. Trophy at a disadvantage to its rivals.
The cabin of the Renault matches up well against the competition. There are some lovely dashings of Alcantara, as well as various carbon fiber accents. The configurable accent lighting is also a nice touch, as is the 7.0-inch digital gauge cluster. The seats are firm but hold you in position well. Unfortunately, the seats didn’t adjust quite as low as I would have liked. A nine-speaker Bose audio system with a subwoofer and digital amplifier is another nice touch. 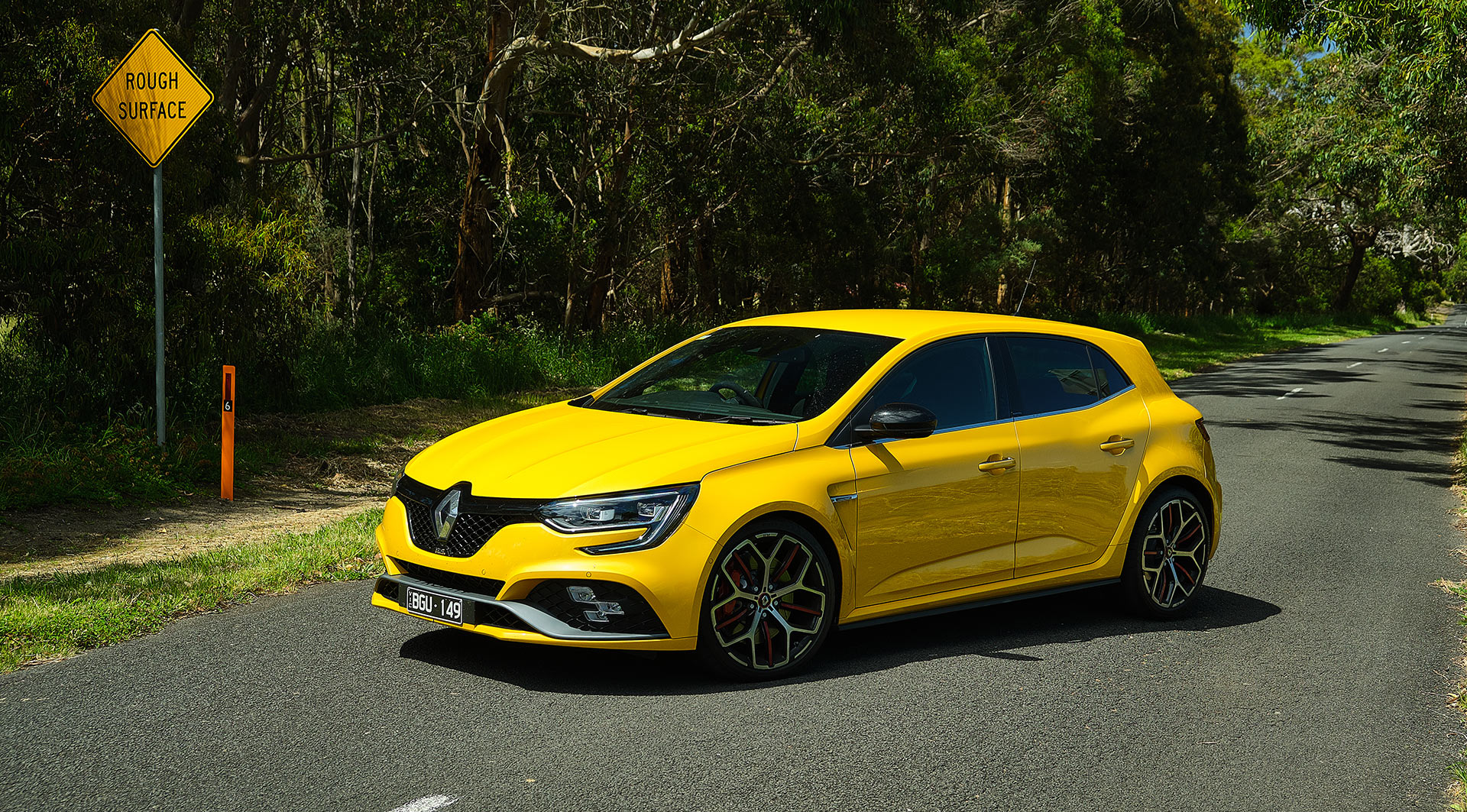 In terms of fuel efficiency, Renault claims the Megane R.S. Trophy consumes just 8 l/100 km (29.4 mpg) over the combined cycle. We recorded 10.2 l/100 km (23.9 mpg) which, considering how we were driving the car, is impressive, although our roadtrip did include long highway stints that brought that figure down.
Our test car was priced at AU$56,990, including the AU$1,000 Liquid Yellow paint but excluding on-road costs.
The Megane R.S. Trophy EDC is a special car. Not only is it better than the manual but it is one of the finest hot hatches on sale. Sure, it is a little uncompromising but that only adds to its charm. In 5-7 years, I think I might just have to start searching the classifieds for one… 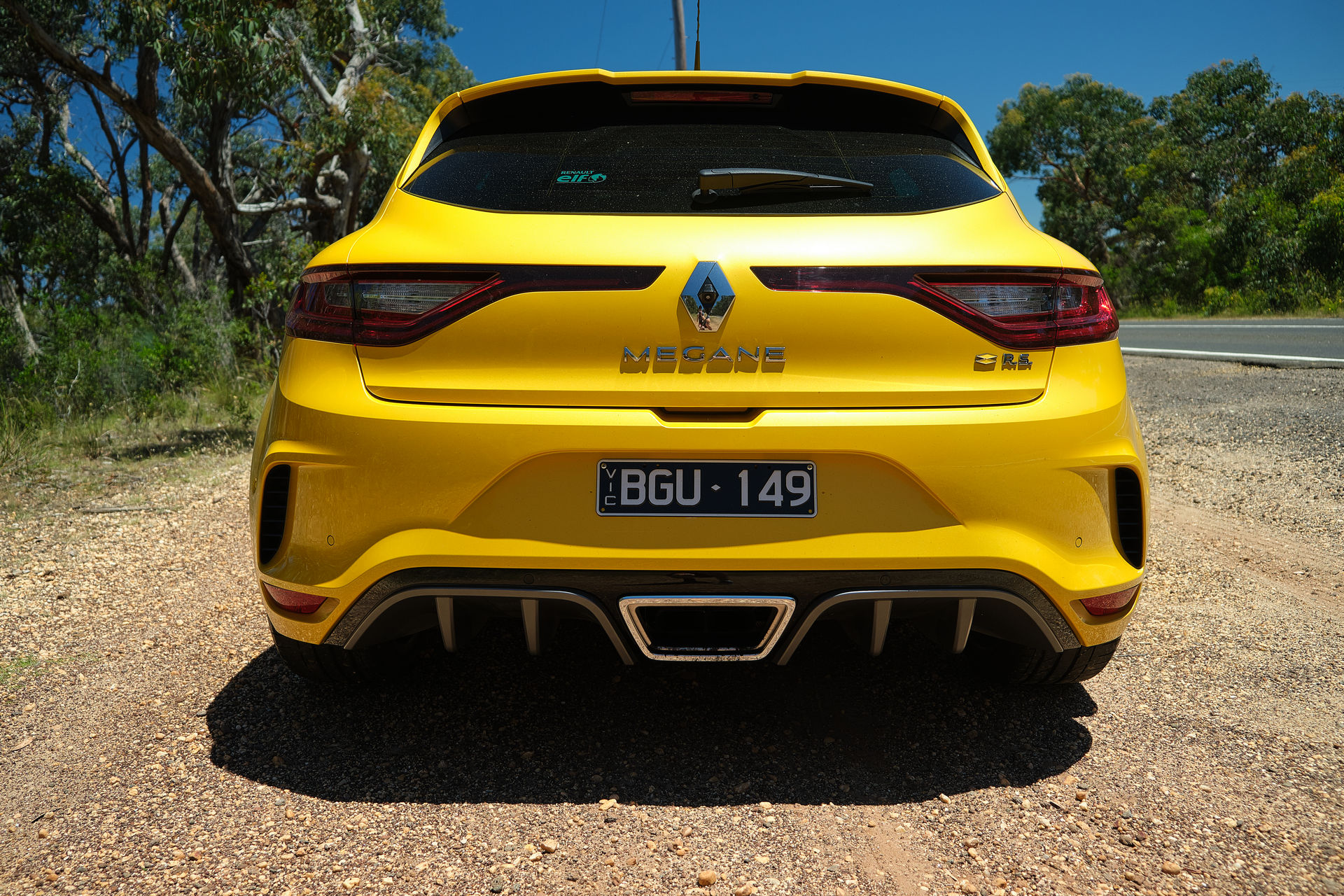