Billed as the “quickest and most powerful production BMW car ever,” the M5 CS features a twin-turbo 4.4-liter V8 engine that has been tuned to produce 627 hp (468 kW / 636 PS) and 553 lb-ft (750 Nm) of torque.
The engine is connected to an eight-speed automatic transmission and a rear-biased all-wheel drive system. This setup enables the car to accelerate from 0-60 mph (0-96 km/h) in 2.9 seconds, which is 0.2 seconds faster than the M5 Competition. If you keep your foot planted on the accelerator, the car will eventually hit a top speed of 190 mph (306 km/h).
Also Read: 2021 BMW M5 Facelift Revealed, Is More Imposing Than Ever 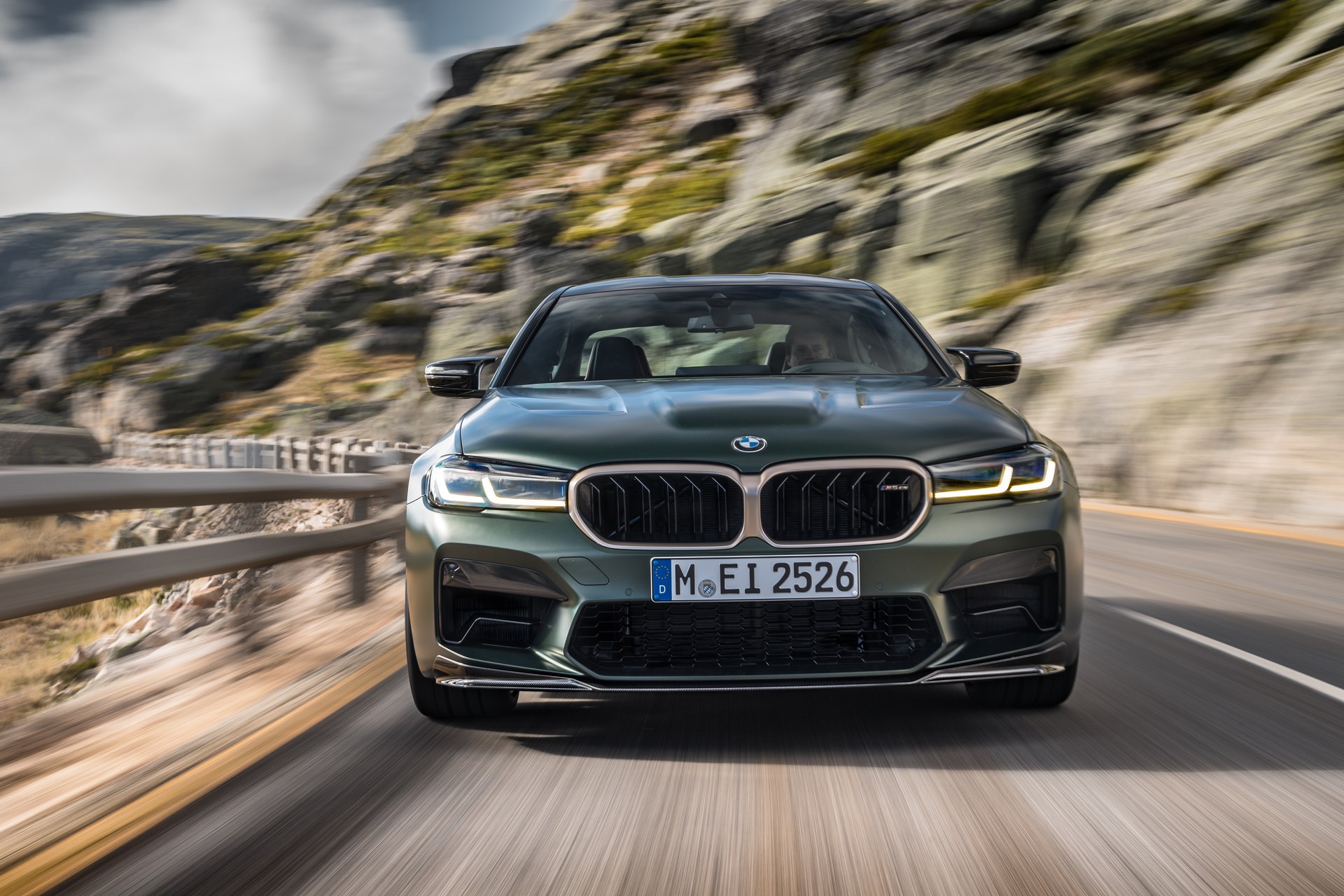 Sticking with the performance theme, the M5 CS features an Active M Differential and a selectable all-wheel drive system just like the standard M5. The latter has 4WD and 4WD Sport modes as well as a 2WD mode for tire smoking antics.
Since the CS is based on the M5 Competition, it features stiffer engine mounts, firmer springs, a beefier anti-roll bar and a lower ride height than the standard M5. However, engineers didn’t stop there as they made further changes to the springs and Dynamic Damper Control system to take advantage of the CS’ lower weight and available Pirelli P Zero Corsa tires.
Speaking of the weight reduction, the M5 CS has been equipped with a number of a carbon fiber reinforced plastic components including the hood, roof, front splitter, mirror caps, diffuser and rear spoiler. The company didn’t stop there as they also removed some of the sounding proofing for additional weight savings. Thanks to these and other changes, the model weighs 230 lbs (104 kg) less than the M5 Competition. 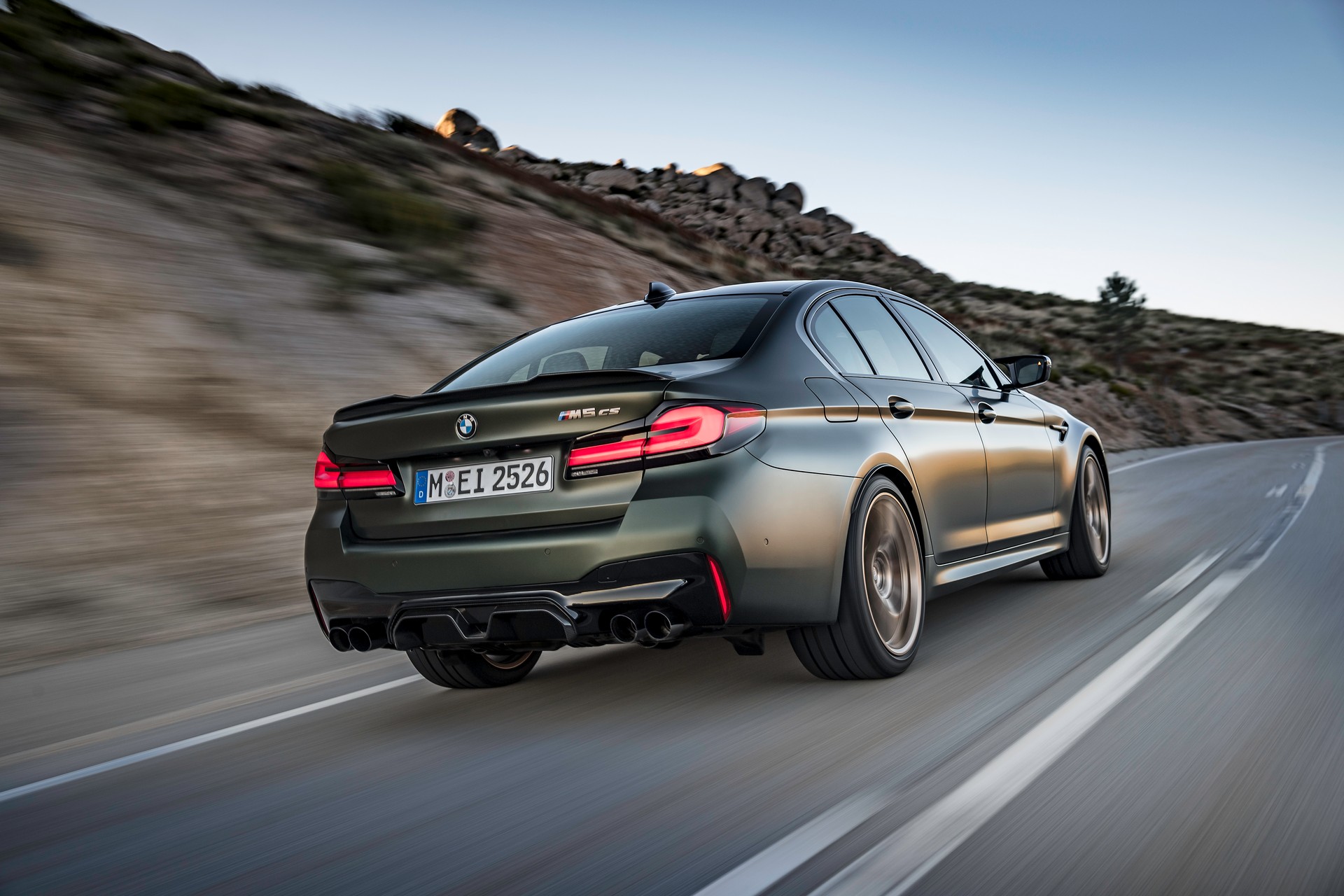 On the styling, the car is distinguished by a gold bronze grille surround and matching 20-inch wheels. The latter are backed up by a carbon ceramic braking system which features red or gold calipers.
The car has also been equipped with a ventilated hood, shadowline trim and racing-inspired LED headlights with yellow illumination. Unfortunately, there’s a limited color palette that includes standard Brands Hatch grey metallic as well as Frozen Brands Hatch grey metallic and Frozen Deep Green metallic.
Moving into the cabin, buyers will find power, heated carbon fiber front seats with illuminated M5 logos. They’re wrapped in black Merino leather and feature Mugello red accents, red contrast stitching and headrests with an imprinted map of the Nurburgring Nordschleife. 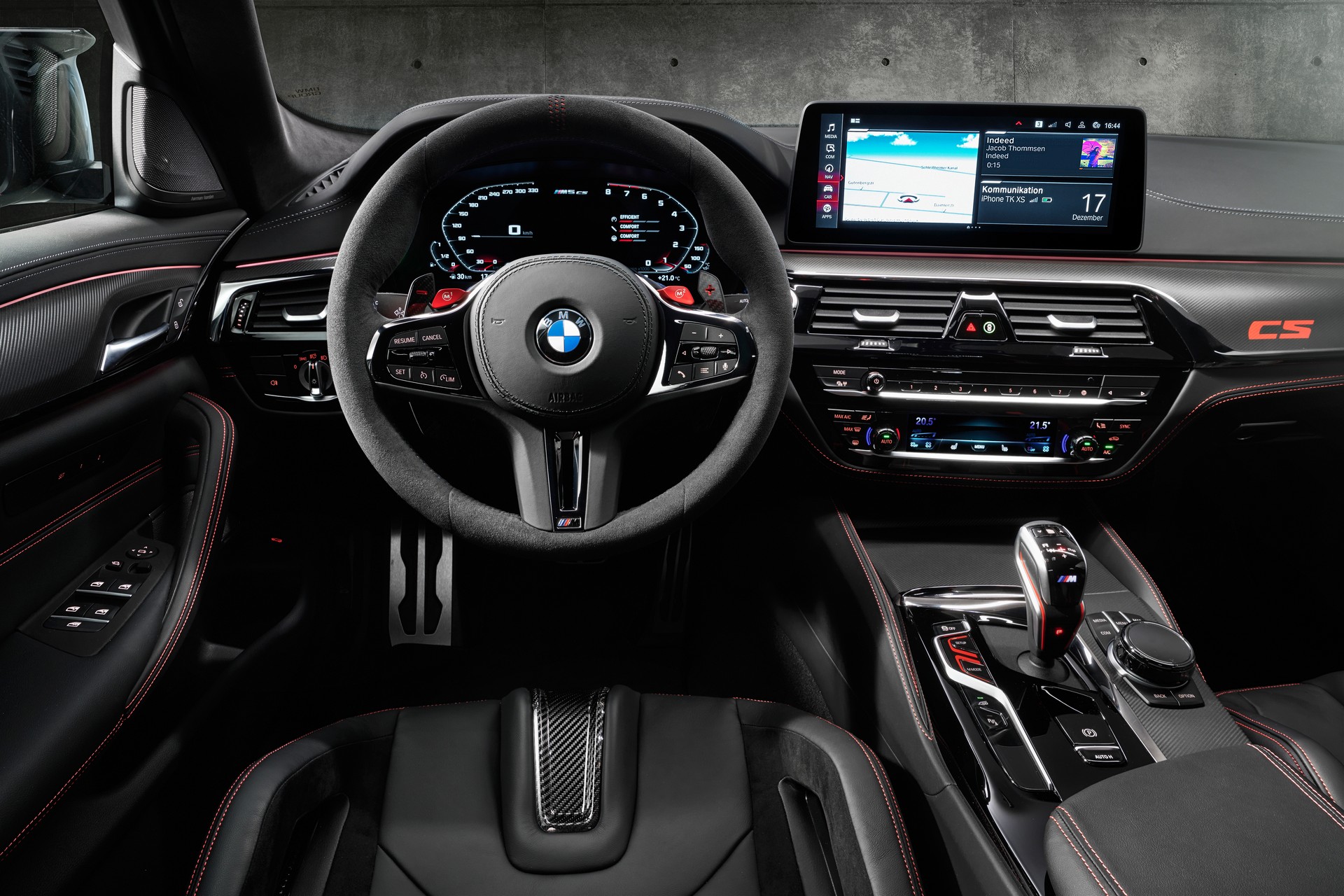 The changes don’t stop there as the model has two individual rear seats and an M Alcantara steering wheel with carbon fiber paddle shifters. Other highlights include a minimalist center console, an Alcantara headliner and M seat belts with tri-color stitching. Elsewhere, designers added special floor mats and illuminated “M5 CS” door sill plates.
The car also comes equipped with two 12.3-inch displays, a four-zone automatic climate control system and aluminum dark carbon structure trim. Other niceties include an ambient lighting system, a wireless smartphone charger and a Harman Kardon audio system.
The M5 CS will only be available for one model year and U.S. pricing starts at $142,000 before a $995 destination charge. Across the Atlantic, Germans will have to shell out EUR180,400 when it arrives this spring.